A parasitoid is an organism that lives on or in a host organism and ultimately kills the host. 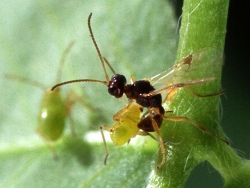 See other words beginning with P

If you have found this glossary useful please consider supporting the Amateur Entomologists' Society by becoming a member or making a donation.